Wipers are the subsequent replacements of Destroids when they overqualified for the position of going after non-hidden dimensional remnants of a dimension about to become the set of an Interdimensional Empire. For Destructor-Class Outer Gods, their methods to deal with remnants of punished dimensional is more subtle than the over-the-top standards of other Destructors, even for their traditional Lovecraftian appearance. Their biggest secret is that they are Outer Gods made of antimagic, or quantum antimatter, capable of destroying magic and potentially people's souls, which are quantum in origin, essentially making them Antithaumite Outer Gods, as their creators saw antimagic as a great weapon against Interdimensional Empires.

A Wiper Superior (The Forefront Image) is the all impourent germinating seed for a Wiper Cashe to exist. Though not incredably large for their kind, the Wiper Superiors are nonetheless the all impourent gravemind of wipers, the asexual creators of the Queens, via the octopus beak on their chest which produces a queen egg, and above all the barer of the lifelink for all of the Wipers, where if the Superior is taken down, then all the other Wipers fall as well into the Hybernation realm. They typically appear as ambassitors and representors of the wipers to other Destructor Classes to ask if their services would be needed in an even the Destructor didn't do a perfect enough job or if they're particularly difficult to take down, though often the other Destructors are too proud of themselves to embrace Wipers, thus it is a matter of persistence undil pride is swallowed and their aide embraced.

The Eyeprobes are the recon team of the Wipers. They go forth to spy on the current colony of punished dimensionals and be sure that they are isolated from other sentient life. Once this is confirmed, The Eyeprobes split into different groups, one set to inform the other Wipers, others to keep recon in an event of new developments. They commonly come on castes, Rookies still wearing their harden eggshell and pocess youngling arms who are often very amateurish and often become the source of conspiracy theories when spotted and took photos of, also, they're about as brave and smart as a Halo Grunt. Veterans the seasoned pros that sheded their harden shell and are starting to lose the youngling arms in becoming more confident and careful. Smokers are a specialized fog-maker aide class that help Eyeprobes be kept out of sight when in broad daylight or a publicly visited area, or sometimes even aide in Wiper raids in alou to "The Mist" and allow Portalings plenty of chances for surprise attacks. Elder Eyeprobes are the aged and experienced of the Wiper Eyeprobes, and are the strongest and most powerful of the Eyeprobes and are the sheer authority of the eyeprobe clicks, capable to erase the memory of a witness with eye beams or subtly manipulate others to not believe in what the witness says to be deemed a crazed pariah, of which often or not the ostracized outcast would be captured by a Portaling then after. From even the day they hatched from their eggs laid by the queen or were a dimensional that faced conversion if not a strong specimen, Eyeprobes have impeccable eyesight, able to see even farther then birds of prey and are able to see every detail, even possessing x-ray vision to allow see-through in just about anything, are able to telepathically read minds, capable of superb hypnosis, and are fast-moving little buggers also capable of camouflage that can't be detected by even most high-level magic users and/or higher masters unless they possess cosmic awareness. Though Eyeprobes are not built for combat, when threatened they can hypnotize a threat into falling asleep and forgetting what they witnessed, or if they had to, they can swarm like angry bees and overwhelm in a brutish adversary into submission after being overwhelmed by sheer numbers and blinded by Smokers.

Portalings are the real meat of the Wipers. Capable of travel via portals that can access any dimention and any spefific part of it, Portalings are relentless persuers of punished dimentionals no matter where they are or where they go. Often they sneak-up on a solatary dimentional that was reported to have strayed too far from the safety of a dimentional colony, which they would proceed to grab and drag back into the Wipe Dimention. They also do the same to any that had witnessed any wiper in action to maintain their secret if need be, as well as any stronger dimentional that could prove a challnage for their mission, like a respected hero or a sage with even limited cosmic awareness. But when a Dimentional Colony is in a bad enough disarray from all the captures of isolated beings and curfews become enforced and mandated that absolutely discourages more seperate cases or if a witness manages to maintain credability, then Portalings will appear enmass and capture any and all dimentionals. Portalings are able to shoot a paralising paste that stuns and paralises a dimentional, which is fast acting and potent. Speed, size and power does not matter to a Portaling, for if any dimentional has been part of the punished dimention, it will come after them. Portalings are commonly converted dimentionals that were strong enough specimens to become so, though a naterol born one can exist, but in rare cases.

The Producer of the Wiper Cashe, whether by naterolly produced eggs or converting a mortal into a wiper. In always being pregnet, a Wiper Queen is always producing eggs to the point that they cover an entire Wiper Cave in the Wipe Dimention. When given a punished dimentional, she will proceed to eat the mortal, to then regurgitate out as an egg that becomes a new wiper. Any attempt to fight back is always made pointless as Queens are able to tank pain, are fast for their size and pocess a mirad of powers that cancel out attempt escapes, pocess quick reflexes that protect against anything powerful, and pocess heat-pits and hyper-hearing in replacement to eyes since their face is one big manable, though often she can be able to share visions with Eyeprobes in an event these reliable powers fail, so very little can surprise a Wiper Queen. Though the second impourent, for as long as a Superior Lives, a Queen can be afford to be lost, for only the Superior to suck up her quantom energy and basicly rebirth her to be stronger then ever, which empetises the greater impourence of the Wiper Superiors. 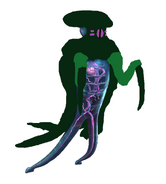 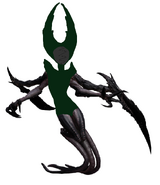