Xandy N. Wargander is a ruthless Alternate UUniversal Hydrocabiais ('water rodent') from the Planet Carbungia. Xandy is a well-known hero who rose to fame when she used other nation's tec to save her home from her enemy Xerxes XX, while Xerxes did the same thing. But when she got some help from the Shell Lodge Squad, she was able to put him in his place and stop the Villains' Act's rule. After her victory, she joins the Heroes Act along with her new partner, Magnum the Great. She even adopts a new pet companion named Nytrox.

Xandy was born in the Southern planet of Carbungia within a setting that was recovering heavily from the Interuniversal Wars, being the motivation of her parents and older brother to move on so they can give birth to her, her brother giving her the name Xandy, which is Thexan for 'Defender of the People'. Thus, Xandy grew up in a new community of peace and harmony when humans were still present in her UUniverses. She met Chase Cannell before her 6th Birthday in Xaono City and have since grown into best friends. However, as years passed, Chase's father became a member of the AUU Grand Council, which meant he and Chase had to move to the humans' home system to start their job. Before and after Chase's departure, Xandy learned many forms of martial arts. She dreamed of being a real hero someday, and thus learned how to ride many animals, some dangerous, some harmless. She can even send an animal or predator to sleep by playing musical instruments like a soothing siren. She can even swim as good as a fish can, and is capable of catching one like an expert, and has been able to achieve her species' expertise of high-diving by jumping off a high waterfall without a scratch. She's also been known to elude sharks with incredible speed. She lived in great peace with the humans until a terrible villains uprising threatened the humans' existence, and they used their technology to teleport to another universe. Since the humans' absence, evil had grown in her worlds. Villains eventually rose to power, and Xandy and her family lived in turmoil.

Then one day, Xandy's parents were murdered by a terrible Metavincemander tyrant named Xerxes XX before they could leave on a business trip to fund Xaono City. Xandy, wanting sudden revenge, took her golden sword, and attacked Xerxes. The fight took half an hour, but Xerxes was defeated. However, Xerxes eluded her, and the two became arch-enemies ever since. Many years later, when Xandy finally matured, she learned Xerxes was stealing other nation's technology, including the humans. That was when Xandy decided to do the same thing. The enemies battled each other in incredible fights with the technology they both obtained, and Xandy always won.

Xandy spent her life having fun AND protecting the Alternate UUniverses from the forces of evil. She lived with her aunt and uncle, and spent some time studying technology of other nations the same way Xerxes did. She knew that Xerxes was a strong and powerful ruler, and could easily plan an attack on her hometown. However, Xandy was ALWAYS prepared to defend her home. Whenever she was involved with Xerxes' plans for universal domination, she always won.

Xandy also had an uncontrollable urge to kill Xerxes since he killed her parents. But she knew that he had to do better than that if she ever gets her hands on him. Xandy, on some occasions, spent her night time crying from the loss of her parents in the hands of her enemy. But she swore to someday catch Xerxes, and finally lock him up. She always knew that if she had the right tools, she had the right talent. And she believed she could do it, but so far, she hadn't. But someday, she'll exact her revenge, and save her worlds from evil.

Xandy is a quick-thinker. She is a genius in science and math, and is capable of inventing and engineering. She is an expert in riding different animals, she is skilled in hand-to-hand combat, and she has good weapon skills. Being semi-aquatic, she can swim efficiently and quickly, and can hold her breath underwater for 25 minutes. She is even capable of scaling walls and surfaces with her claws, as well as swift reflexes and vast agility. She even created her own blaster gun she named 'Oalanx V2', which has various ammunition settings that are voice activated. It comes with a plasma grenade launcher, rapid-fire blasts, heat-seeking blasts, ricocheting blasts, armor-piercing blasts, and a pyro-blast. It is also only used by Xandy through a palm-print ID scanner on the handle meant to only recognize Xandy's DNA. She also keeps a katana made of a lightweight and durable golden alloy for melee combat.

However, if she needs maximum damage, she occasionally carries a Huncus LNG-880 Laserblast Gun, a large gun that fires concussive blasts of highly-charged laser-based gamma energy that releases trace rays across a wide blast radius, and often knocks a target out cold. This gun has a short cooling cycle, but requires a laser battery as it's common ammo.

As of the hiring of Agent Solus, Xandy has another identity called Xasandra Waterfoot. This avatar disguise is a UIS animal called a Widdle, an aquatic rodent with oversized collapsible feet for swimming, and two pairs of expandable and controllable lungs that expand her lung capacity to 2 hours of staying underwater. Her Oalanx pistol is even transferred into a modified Raghnall 0871 Canister Blaster. She also possesses a neutronium-gold vibrokatana and another pet besides Nytrox: A Krake named Splash, who is of an artificial lizard-like aquatic synapsid who is very social, playful, and very loyal to both Xandy and Xasandra. 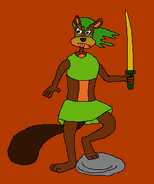 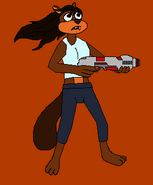 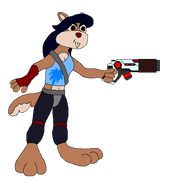 Xasandra Waterfoot
Add a photo to this gallery
Retrieved from "https://spongebobandfriendsadventures.fandom.com/wiki/Xandy?oldid=183962"
Community content is available under CC-BY-SA unless otherwise noted.